Academic publishers charge vast fees to access research paid for by us. Down with the knowledge monopoly racketeers 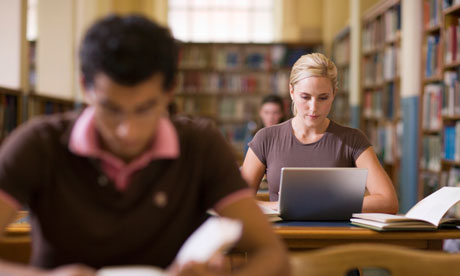 Who are the most ruthless capitalists in the western world? Whose monopolistic practices make Walmart look like a corner shop and Rupert Murdoch a socialist? You won't guess the answer in a month of Sundays. While there are plenty of candidates, my vote goes not to the banks, the oil companies or the health insurers, but – wait for it – to academic publishers. Theirs might sound like a fusty and insignificant sector. It is anything but. Of all corporate scams, the racket they run is most urgently in need of referral to the competition authorities.

Everyone claims to agree that people should be encouraged to understand science and other academic research. Without current knowledge, we cannot make coherent democratic decisions. But the publishers have slapped a padlock and a "keep out" sign on the gates.

You might resent Murdoch's paywall policy, in which he charges £1 for 24 hours of access to the Times and Sunday Times. But at least in that period you can read and download as many articles as you like. Reading a single article published by one of Elsevier's journals will cost you $31.50. Springer charges €34.95, Wiley-Blackwell, $42. Read 10 and you pay 10 times. And the journals retain perpetual copyright. You want to read a letter printed in 1981? That'll be $31.50. 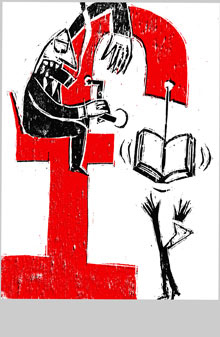 Of course, you could go into the library (if it still exists). But they too have been hit by cosmic fees. The average cost of an annual subscription to a chemistry journal is $3,792. Some journals cost $10,000 a year or more to stock. The most expensive I've seen, Elsevier's Biochimica et Biophysica Acta, is $20,930. Though academic libraries have been frantically cutting subscriptions to make ends meet, journals now consume 65% of their budgets, which means they have had to reduce the number of books they buy. Journal fees account for a significant component of universities' costs, which are being passed to their students.

Murdoch pays his journalists and editors, and his companies generate much of the content they use. But the academic publishers get their articles, their peer reviewing (vetting by other researchers) and even much of their editing for free. The material they publish was commissioned and funded not by them but by us, through government research grants and academic stipends. But to see it, we must pay again, and through the nose.

The returns are astronomical: in the past financial year, for example, Elsevier's operating profit margin was 36% (£724m on revenues of £2bn). They result from a stranglehold on the market. Elsevier, Springer and Wiley, who have bought up many of their competitors, now publish 42% of journal articles.

More importantly, universities are locked into buying their products. Academic papers are published in only one place, and they have to be read by researchers trying to keep up with their subject. Demand is inelastic and competition non-existent, because different journals can't publish the same material. In many cases the publishers oblige the libraries to buy a large package of journals, whether or not they want them all. Perhaps it's not surprising that one of the biggest crooks ever to have preyed upon the people of this country – Robert Maxwell – made much of his money through academic publishing.

The publishers claim that they have to charge these fees as a result of the costs of production and distribution, and that they add value (in Springer's words) because they "develop journal brands and maintain and improve the digital infrastructure which has revolutionised scientific communication in the past 15 years". But an analysis by Deutsche Bank reaches different conclusions. "We believe the publisher adds relatively little value to the publishing process … if the process really were as complex, costly and value-added as the publishers protest that it is, 40% margins wouldn't be available." Far from assisting the dissemination of research, the big publishers impede it, as their long turnaround times can delay the release of findings by a year or more.

What we see here is pure rentier capitalism: monopolising a public resource then charging exorbitant fees to use it. Another term for it is economic parasitism. To obtain the knowledge for which we have already paid, we must surrender our feu to the lairds of learning.

It's bad enough for academics, it's worse for the laity. I refer readers to peer-reviewed papers, on the principle that claims should be followed to their sources. The readers tell me that they can't afford to judge for themselves whether or not I have represented the research fairly. Independent researchers who try to inform themselves about important scientific issues have to fork out thousands. This is a tax on education, a stifling of the public mind. It appears to contravene the universal declaration of human rights, which says that "everyone has the right freely to … share in scientific advancement and its benefits".

Open-access publishing, despite its promise, and some excellent resources such as the Public Library of Science and the physics database arxiv.org, has failed to displace the monopolists. In 1998 the Economist, surveying the opportunities offered by electronic publishing, predicted that "the days of 40% profit margins may soon be as dead as Robert Maxwell". But in 2010 Elsevier's operating profit margins were the same (36%) as they were in 1998.

The reason is that the big publishers have rounded up the journals with the highest academic impact factors, in which publication is essential for researchers trying to secure grants and advance their careers. You can start reading open-access journals, but you can't stop reading the closed ones.

Government bodies, with a few exceptions, have failed to confront them. The National Institutes of Health in the US oblige anyone taking their grants to put their papers in an open-access archive. But Research Councils UK, whose statement on public access is a masterpiece of meaningless waffle, relies on "the assumption that publishers will maintain the spirit of their current policies". You bet they will.

In the short term, governments should refer the academic publishers to their competition watchdogs, and insist that all papers arising from publicly funded research are placed in a free public database. In the longer term, they should work with researchers to cut out the middleman altogether, creating – along the lines proposed by Björn Brembs of Berlin's Freie Universität – a single global archive of academic literature and data. Peer-review would be overseen by an independent body. It could be funded by the library budgets which are currently being diverted into the hands of privateers.

The knowledge monopoly is as unwarranted and anachronistic as the corn laws. Let's throw off these parasitic overlords and liberate the research that belongs to us.

• A fully referenced version of this article can be found on George Monbiot's website. On Twitter, @georgemonbiot