Did farming push us to war? 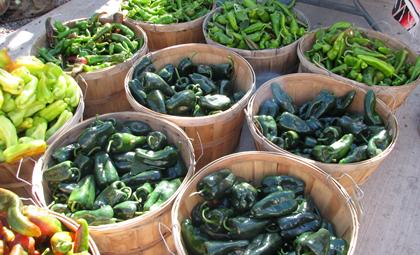 Peppers for sale at the Santa Fe farmers market.
CAPTION
By Elizabeth Weise

Farming makes no sense. Textbooks tell us cultivation and herding came about because they allowed humans access to more abundant food. But an analysis shows that they're actually about 50% less efficient than the hunter-gatherer lifestyle they replaced in terms of producing food. Early farmers ate less well, were smaller and less healthythan their roaming counterparts.

Why then did humans make the switch to agriculture, the engine of human civilization that gave us the pyramids, empires and eventually the iPod?

More children and war is the answer arrived at by economist and professor Samuel Bowles of the Santa Fe Institute in New Mexico in a paper in this week's edition of the journal Proceedings of the National Academy of Sciences.

About 12,000 years ago, at the end of the Pleistocene and the beginning of the Holocene, some hunter-gatherer groups began to grow crops and herd animals. It's called "the Holocene Revolution" and a revolution it was. But Bowles calculates that there really wasn't all that much in it for the individuals themselves. Given the limited abilities of those original farmers, an hour of labor resulted in about 1,041 calories worth of return in the form of food.

For hunter-gatherers, the figure is 1,662 calories per hour of work.

A little farming does make sense, Bowles calculates. Getting most of your food from hunting and foraging, but dropping some seeds or roots in the ground to come back to later doesn't carry a huge cost and can add a buffer of food security.

But switching entirely to farming means more work for fewer calories. So why did more than 99% of humanity make the switch? Bowles suggests that in some areas, where constitutions were especially advantageous, farming could have made sense, probably as an adjunct to foraging. Think the Fertile Crescent or the Nile delta.

Those peoples were also smaller, less healthy according to the archeological record. But once farming started, two things pushed it to the forefront, the paper suggests.

Farmers have more children, because their lesser mobility lowered the costs of child rearing. Hunter-gatherer women had to carry their children while they looked for food. Farmers don't. More children among farmers could have "contributed tot he dramatic increase in population associated with cultivation," the paper says.

But perhaps most interestingly, war may have been the thing that really pushed us to the plow. In his paper, Bowles writes:

The fact that agricultural wealth (stored goods and livestock particularly) was more subject to looting may have induced farming groups to invest more heavily in arms and to exploit their greater population densities, allowing them to encroach on and eventually replace neighboring groups.

The shift to farming might also have had an effect on the human temperament, Bowles suggests in an intriguing aside. Studies have shown that in cultures where some people farm and some people still follow a foraging lifestyle, such as the Amazon and Madagascar, farmers are less impatient. "Consistent with the view that farming would be unattractive to impatient individuals, among the Mikea of Madagascar, those engaged in foraging exhibited higher rates of impatience, in behavioral experiments, than did farmers."